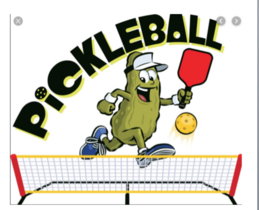 Bring your rackets, Find people to play with and have FUN!

Played every Wednesday
10 am to Noon

or Call the office for special set-ups 644-0808
Bear Paw Pavilion
Meet other players and set-up games for other times,

Learn the rules and have fun.

Play at your own risk.

·Pickleball is played either as doubles (two players per team) or singles; doubles is most common
·The same size playing area and rules are used for both singles and doubles

·The serve must be made underhand.
·Paddle contact with the ball must be below the server’s waist (navel level).
·The serve is initiated with at least one foot behind the baseline; neither foot may contact the

baseline or court until after the ball is struck.

·Only one serve attempt is allowed, except in the event of a let (the ball touches the net on the

serve and lands on the proper service court; let serves are replayed).

·Both players on the serving doubles team have the opportunity to serve and score points until they commit a fault *(except for the first service sequence of each new game).
·The first serve of each side-out is made from the right-hand court.
·If a point is scored, the server switches sides and the server initiates the next serve from the

·As subsequent points are scored, the server continues switching back and forth until a fault is

committed and the first server loses the serve.

(except for the first service sequence of the game*).

·The second server continues serving until his team commits a fault and loses the serve to the opposing team.
·Once the service goes to the opposition (at side out), the first serve is from the right-hand court and both players on that team have the opportunity to serve and score points until their team commits two faults.
·In singles the server serves from the right-hand court when his or her score is even and from the left when the score is odd.

*At the beginning of each new game only one partner on the serving team has the opportunity to serve before faulting, after which the service passes to the receiving team.

·When the ball is served, the receiving team must let it bounce before returning, and then the serving team must let it bounce before returning, thus two bounces.
·After the ball has bounced once in each team’s court, both teams may either volley the ball (hit the ball before it bounces) or play it off a bounce (ground stroke).
·The double bounce rule eliminates the serve and volley advantage and extends rallies. Non-Volley Zone

smashes from a position within the zone.

·It is a fault if, when volleying a ball, the player steps on the non-volley zone, including the line

touch the non-volley zone including the associated lines.

·It is a fault if, after volleying, a player is carried by momentum into or touches the non-volley

zone, even if the volleyed ball is declared dead before this happens.

oA ball is volleyed from the non-volley zone
o A ball bounces twice before being struck by the receiver
o A player, player’s clothing, or any part of a player’s paddle touches the net or the net

·Players use a coin toss to determine who will serve first. The winner of the coin toss will have the option to choose side or to serve or receive.