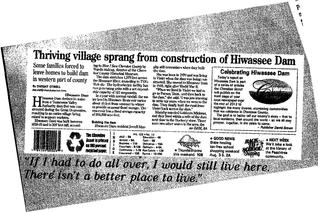 Tucked in among the Blue Ridge Mountains of North Carolina, bathed by a 6,000 acre lake and virtually surrounded by 500,000 acres of the Nantahala National Forest, there is a place called Bear Paw.  This information summary will help you understand why we think you may come to spend a day and wish to remain a lifetime.

The history of Bear Paw begins with a decision to build a series of dams, Hiwassee and Chatuge Dams on the Hiwassee River and Nottely Dam on the Nottely River, a tributary to the Hiwassee River.  All three dams are operated as a unit for the purpose of flood control, navigation and power generation.  Hiwassee Dam is one of 51 dams in the TVA, Tennessee Valley Authority, water control systems that provide flood regulation in the Tennessee, lower Ohio and Mississippi Valleys.  This system also creates a navigation channel on the Tennessee River and provides hydroelectric power.  Construction on the Hiwassee Dam began in July 1936 and was completed in May 1956.

After the site of the dam was chosen, the first task undertaken by the TVA was the development of access roads to the site.  The only roads available were winding mountain roads, unsurfaced and impassable during wet weather.  Consideration was given to building a rail spur to the dam site.  However, after the job was completed the spur would be abandoned and a good highway would have to be constructed as a permanent part of the development.  It was decided to locate the job railhead at Turtletown, Tennessee, and to build a highway from there to the job site.  Today the road is TN Highway 123 to NC Highway 294 to Hiwassee Dam Road.
Because Hiwassee Dam was built in a sparsely settled and isolated region, there was a shortage of available residential labor and a lack of housing facilities for the imported labor.  These conditions necessitated building a complete construction village as a self-contained community unit.  The village consisted of 42 permanent houses, 73 temporary houses, five men’s dormitories, one women’s dormitory, a cafeteria, hospital, a community building, personnel office, and a school for those children in the village who were in the higher grammar school grades.  In addition, there were nine group garage buildings, a service station, bowling alley, and an observation building.

Estimates of the personnel requirement for the construction of the dam showed that housing facilities at the dam would be required for 1,100 people.  Also, because of the remoteness of the site, it was important to not only provide housing for those who were building the dam, but also those who would eventually operate the dam and power plant.  The site of the village was to be within walking distance, about 1,500 feet, from the construction site.  Construction ended in 1956.

1959 – “Hiwassee Lake Resort Village” was organized to own land in Cherokee County.  The tract of land described in the deed came from the United States of America acting through the Tennessee Valley Authority.  The land recorded on February 17, 1959 included the Hiwassee Dam construction and operating village.

One of the first sales offices was located in Atlanta, Georgia.  Those who were interested were invited to the Peachtree Office Building for a buffet supper.  Displays were presented depicting the property.  Those interested were invited to the resort for a two-day stay at no cost.  The adults and children explored the lake, resort and subdivision.

By mid-year 1963, 210 home sites were sold.  Three miles of road were constructed throughout Sections I, II and III.  Before that, property was shown by boat and by horseback.  The first new water well was completed and tied in with the original water storage and treatment system.  Three estate homes had been completed and there were plans for twelve more.  Work  began on the parks in Sections I and II.  The original Clubhouse facilities for the exclusive use of the property owners and their guests were completed in April that year.

Later that same year, the first 12 cottages were offered for sale.  They were located on the right side of Village Road starting near the social pavilion and extending to the entrance of Hiwassee Lake Estates.    That entrance was near the intersection of Village Road and Highland Road.  You can still see the “Bear Paw” at the intersection, imbedded in the rock face.

1965 – 589 home sites had been sold, more than 50% of the available lots.  Steps in the development were being finalized to make it a year-round resort.  The first phase of the security system was put into effect.  Sixteen homes were completed.  A model home was constructed at the intersection of Village Road and Lonesome Pine.  It is the gray house on the southeast corner.  Another model is farther east on Village Road, the “A-frame” cottage on the top of the hill to the left.

January 23, 1973 – The resort community became known as “Bear Paw” under the ownership of Dr. Robert Bretches, Errell Steele, Jr., and First Georgia Investment Corporation, a wholly owned subsidiary of Cousins Properties.  They wanted to provide for the preservation of the values and amenities of the “Resort” and “Common” properties.  “Common properties” were then known as the “Class A Residential Area,” which included the security gates, open spaces, roads and similar facilities.  “Resort properties,” included a timber and fieldstone lodge, a gym and a snack shop.  Surrounding the lodge were the tennis courts, swimming pool, ice skating rink, and playgrounds.  Recreational facilities also included a sled slope, stables, and marina.

Bear Paw was 1,000 acres of woodland, of which 469 acres were exclusively devoted to privately owned permanent homes.  Two hundred and 30 acres were designated specifically for condominiums.  December 19, 1973, the lodge burned to the ground and was subsequently replaced by the present-day clubhouse/office facility.

Today, the Bear Paw community consists of 1,090 lots, over 200 homes, 42 cottages, 23 condominiums and a marina.  More and more of the friendly people at Bear Paw are permanent residents.  They choose to enjoy the services provided year-round, such as security, well-maintained roads and grounds, as well as hiking, fishing and boating.  They also enjoy the summer months that are best for swimming and tennis.

The Bear Paw community consists of the “Bear Paw Service District,” a special service district ratified by the State of North Carolina, that serves the common properties and the majority of the property owners.  A small number of property owners are excluded and are members of the “Hiwassee Lakefront Property Owners Association.”  The “Cottage Owners” and the “Condominium Owners” Associations are also excluded.  However, both are under contract with the Service District to provide most of the services like security, roads and recreational facilities.

The benefit of the “Bear Paw Service District” is that as a special service district ratified by the State of North Carolina, it levies taxes based on the assessed value of property and homes in the district.  A seven-member board that is elected by the property owners in the Service District administers the income from the taxes collected by Cherokee County for the Bear Paw Service District.  These monies are used exclusively to provide the services of security, roads, grounds and recreation.  The Service District helps insure that every property owner shares fairly in keeping Bear Paw, on Lake Hiwassee, a premier private living and vacation community in the beautiful mountains of Western North Carolina. 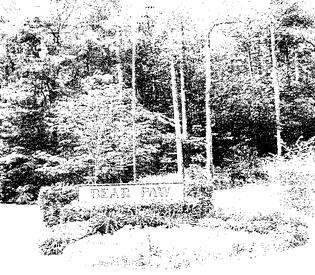